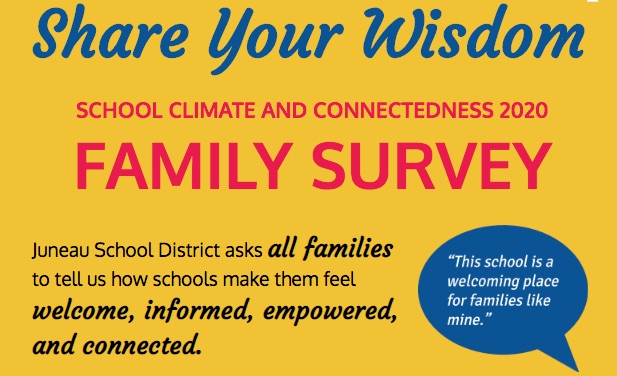 Phone: (907) 523-1700
School Climate Survey
Bark for Schools FAQ's
What is BARK for Schools?
Bark’s flagship product helps parents monitor their children’s personal accounts. But in 2018, after the tragic Parkland shooting, Bark realized that they had the resources to provide the same service — in addition to others — to schools, and to do so in a way that keeps them from spending thousands of dollars each year to protect their students from the worst dangers of the online world. They developed Bark for Schools to give back to communities and to help keep children safe — at absolutely no cost to us. Bark now helps protect more than 1,200 school districts across the country — with dozens more joining every month.

Bark and the district are bound by Bark for Schools Terms of Service found here:
https://www.bark.us/terms/Bark_School_Monitoring_Terms_of_Service.pdf

Does Bark for Schools monitor all devices connected to the network? If a student accesses their JSD google account on a home/personal computer or device, does BARK then have access to all content on that home/personal device? No, Bark for Schools only monitors Google Suite activity on district STUDENT accounts. Bark for Schools does not monitor any device data. Monitoring includes: Gmail, Gmail Chat, G Drive, and Google Docs. A complete list of monitored items can be found here:https://www.bark.us/schools

What is the school district’s motivation for using Bark?
Schools are required by Board Policy and by Children’s Internet Protection Act (CIPA) to monitor student online activity on school district generated accounts. In addition to firewalls, screen monitoring software, and other network management tools, Bark for Schools adds an important layer to our student safety systems. The district is providing students with a digital education environment, and is obligated to monitor it like other school environments. There are incidents of unlawful or unsafe behavior in student accounts every year, and until now we had to rely on others to report it. A new level of safety is now available to the district through Bark for Schools. Students sign an annual internet use agreement that outlines they will not engage in harmful or illegal activities on our system. This tool helps monitors that agreement.

As of today, has BARK for Schools identified any threats, harassment, or self-harm events in JSD?
Yes. In addition, there was a series of unlawful and unsafe information exchanges at the beginning of the school year which prompted the evaluation of our safety compliance and Bark for Schools was discovered as a viable solution.

What happens when an alert is generated by Bark for Schools? Who is notified when a student is 'flagged'? Content is flagged, not students. Alerts go to the School Principal and Assistant Principal, the student’s parent if they have opted in, Superintendent, Student Service Director, Chief of Staff, IT Officer, and Teaching and Learning Director.

The school administrator decides if the alert needs attention or not. If not, the alert is marked as “not helpful” to help train the system--we on occasion get alerts for “false positives”. The identification process usually takes seconds once the alert is opened by the administrator. No alerts are stored in the student’s records. Bark deletes data after 15 days. If a concern is evident, the student is contacted by the building administrator. If necessary, the standard student discipline process is followed. Appeals follow the normal complaint process.

How does the use of BARK for Schools comply with FERPA? Bark for Schools is a “school official” as defined by FERPA and subject to FERPA’s policies. So is Powerschool, the nurse software, the lunch software, and a dozen other products we use daily. Bark for Schools holds less vulnerable student/family data than several of our other programs. The only data they have is student names, student emails, parent emails and a short timed availability of Google Suite content from student district accounts. Family Educational Rights and Privacy Act (FERPA), CIPA, and technical specifications were reviewed by the IT Department before opting in.

What alternatives were considered? Other companies such as Gaggle and AristotleK12 were considered over the past several years. The reason this product was chosen was cost (free). The district does not have the means to monitor manually, and issues were occuring on student accounts. Other similar products run $4-$7/student/year, or about $35,000 for the same type of service.

Is BARK a for-profit or a non-profit? Bark is a for-profit company. However, there is no cost to the school district for use of Bark for Schools--see the first entry in this FAQ. Examples of other for-profit companies that have district data are PowerSchool, Destiny (Library), Promero (Food Services), SNAP (Nurses), Blackboard (Notifications), Google Suite, Microsoft, Papercut (printing), and school photo vendors.

What are the assurances/claims provided by Bark for Schools of privacy? These can be found at: https://www.bark.us/privacy and in their Terms of Service. Bark is fully FERPA compliant.

How long are records kept on students, if at all? In Bark for Schools, student activity is kept for 15 days then purged.

How does the software actually do its work? Computer algorithms monitor student activity for key words and attempts to define context before issuing an alert. Details can be found at: https://s3.amazonaws.com/bark-assets/guides/AI_Data_Technology_BarkForSchools.pdf

How long does it take for the Bark for Schools algorithm to flag a student, and then to notify the District? Is this an effective timeline? Alerts go out between 2-8 hours of an incident. This is much faster than waiting for a student to come forward with a complaint or a parent to find unsafe activity and alert us.

Fundamentally, there is no difference between Bark for Schools and Google’s storage of our data. Both are bound by FERPA and CIPA regulations to not share our data and be monitorable. Both encrypt our data and provide protected backups. Both have signed the Student Privacy Pledge. Bark for Schools does differ in that they are just analyzing Google Suite content and then deletes our data every 15 days.

Can a student opt-out of Bark for Schools and still use the District Google Suite? No. Use of our district technology dictates our compliance with CIPA and JSD Board Policy.

Can a student opt-out of the District Google Suite? It is possible...Deactivating a student account has a cascading impact across services as we have interconnected systems. Wifi and printing will be disabled, access to various online curriculum will be suspended as well. This increases the workload of both the teacher and the student. The student will be reliant on personal technology. Functionally, the student will be in a separate learning model than the rest of their peers. Our learning environment for students relies heavily on this access to the digital environment.

How/why are family emails shared with Bark for Schools? Parents can elect to receive a weekly email about their student’s school account and they can purchase a separate service to monitor their child’s personal account(s). Severe alerts that take place outside of the school day will generate an email to parents, alerts during the school day will not. Parents can unsubscribe from Bark for Schools emails at any time, regardless of enrollment status. Only the guardian email field taken from Powerschool was entered into Bark for Schools. No mailing addresses were shared.

What is the Bark revenue model? It looks like they make money by selling services to parents. How many Juneau parents have subscribed? Bark’s revenue is from the parent product used to monitor children’s personal accounts. Bark for Schools does not charge for monitoring district accounts. We have no way of knowing how many Juneau families are using Bark to monitor their child’s personal accounts, but 13% of district parents have signed up so far for Bark for Schools, the App that communicates alerts to parents regarding their child’s school accounts.

Does Bark for Schools use the data collected to sell to advertisers? No. Per the Bark for Schools Privacy Policy: “We will never sell or rent your Data to third parties or augment, extend or combine your Data with data received from third party sources. Your Data will never be publicly displayed in any way by Bark or any person or entity acting on Bark’s behalf.” NO student data or parent email/info/data is shared by Bark for Schools.
Preschool Applications
JSD has morning and afternoon Integrated Preschool sessions at all elementary schools. Kinder Ready offers half and full day programs at three elementary schools. Click this block for applications.
Website Accessibility
It is the goal of the Juneau School District that the information on its website be accessible to individuals with disabilities in compliance with the requirements of Section 504 of the Rehabilitation Act of 1973 and that the statute's implementing regulations at 34 C.F.R. Part 104, and Title II of the Americans with Disabilities Act of 1990 and that statute's implementing regulations at 28 C.F.R. Part 35.

If you have difficulty accessing information on our website due to a disability, please contact us at webmaster@juneauschools.org and provide the URL (web address) of the material you tried to access, the problem you experienced and your contact information. Be sure to include your name, email address and phone number so that we may contact you.

Grievances can be filed with the district using the procedures established by the Public Complaint Processes and Appeals Board Policy 1312. For more information or to obtain forms contact jessica.richmond@juneauschools.org.

Welcome to the SchoolBlocks
self-guided tour!

The most common question we receive is, how is SchoolBlocks inspired by Pinterest? SchoolBlocks eliminates navigation bars and uses a block style layout that’s similar to Pinterest. It creates a unique and engaging browsing experience, optimizes for mobile and removes a lot of navigational complexity.

Please click on the red plus signs found on this page to learn more about specific features.

This icon appears when you have edit permissions. Hold your mouse down and move the block. You’ll see the page reorganize!

Each block type has a custom editing experience. Click the pencil on any block or view our help documentation to learn more about block types.